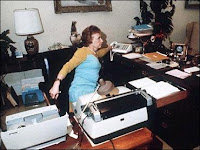 Somebody quick dig up Rose Mary Woods! Press Suckertary Tony Snow, in today's spin conference, was confronted with the inconvenient fact that there's an 18-day gap in the U.S. Attorney-firing eMail trail supplied by the White House recently. The gap, which spans a critical mid-November to December timeframe, was brought up by CNN's Ed Henry. Snow's response? "I've been led to believe that there's a good response for it." Heh heh! Yeah, Tony, we've all been led to believe... Yeah, Tony, I'm sure there's a good, er, response for it. Time for Tony to get back to his desk at Spin Central! Practice that Rose Mary Woods s-t-r-e-t-c-h!!
Posted by W. Hackwhacker at 2:23 PM