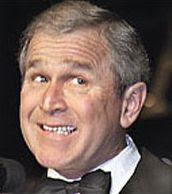 Last night's dinner hosted by the Radio and Television Correspondents featured the annual yuk-up suck-up between the Preznit and his crowd and many of the Washington Press Corpse elites. While advertised as an occasion for socializing between Administration and media elites, it's a perfect example of the corrupt and incestuous relationship that has evolved between those in power and those purporting to be a check on power. Turd Blossom Rove, for example, was featured in a silly rap song while the assembled media bright lights guffawed. Much mutual gonad rubbing ensued. Little wonder that they are reluctant to pursue hard stories against the Bushies, unless and until they are beaten to the punch and shamed by the "alternative" media in the blogosphere. Chris Lehmann's article in the NY Observer is a good summary of this noxious situation.
Posted by Hackwhackers at 11:20 AM