Great Moments in the Bush Assministration 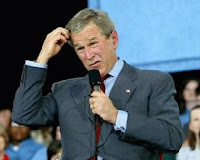 As many are noting, this is the fourth anniversary of the Preznit's "bring 'em on" statement, encouraging insurgents in Iraq to try to force us out. At that point, some 200 American soldiers had been killed; some 3300 have been killed since Chimpy's Challenge. With the Preznit hovering in the upper 20 percent range in approval of his job performance, and the "surge" a looming failure, we need to send a message to him to "git out."
Posted by Hackwhackers at 3:47 PM