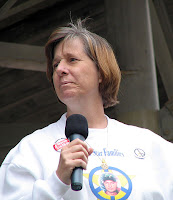 Cindy, who left the Democratic Party because she believes it "caved" to Bush, must believe the chances of impeaching Bush in the last 16 months of his Preznitcy are so good that it's worth tying up the business of the country and giving the Rethugs a "do-nothing" Congress to run against in 2008. We're not great fans of Speaker "Tin Head" Pelosi, but she would certainly thump the poor loon, and fighting off a Sheehan challenge would clearly demonstrate that the Democratic Party is not going to be blackmailed by the most irrational elements on the "left." Also, should she run, look for Rethug elements to contribute to Cindy's campaign, if only to embarrass Pelosi.
Posted by W. Hackwhacker at 11:42 AM