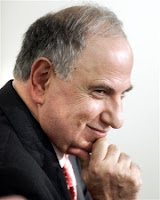 Ahmed Chalabi, the corrupt Iraqi Dead-Eye Dick and the neo-con dimbulbs wanted to parachute into Iraq to set up a provisional government after "Mission Accomplished," looks like he's being maneuvered (or is maneuvering us) into being Prime Minister Maliki's replacement. Recently seen at Gen. Petreaus' side meeting with tribal leaders, the reptilian Chalabi seems to be on the verge of a comeback, thanks no doubt to the influence of Dead-Eye and his band of merry incompetents. Chalabi, who is all-too-willing to serve as the assministration's butt-boy if it propels him into power, has a history of corruption and double-dealing that turned even the CIA against him. Chalabi=Saddam Lite? Isn't democracy grand, people of Iraq?!
Posted by W. Hackwhacker at 5:42 PM