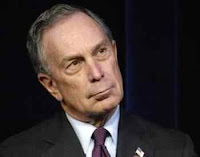 Today's theme seems to be about assholes. Mega-bucks and mega-ego NY Mayor Michael Bloomberg, fresh from his moribund gathering of political corpses (Sam Nunn? Christine Whitman?? Chuck Robb???), has been conducting nationwide polling to gauge interest in a 2008 "independent" presidential bid. The twee political chameleon (Democrat to Republican to independent) is apparently hearing a swelling chorus of voices urging him to run -- and be the spoiler in '08 -- voices heard primarily in his swelled head.

It is commonly believed that a Bloomberg run, though doomed, would draw more Democrats and Democrat-leaning independents than it would Rethugs in a general election, thus potentially giving the Rethugs another 4 years to wreak havoc on America. Another sign that we may be subjected to this man's mega-ego: the "Unity'08" group is reportedly getting ready to re-form as a draft-Bloomberg organization, whose cogs will be oiled with some of Bloomberg's billions. Yeah, right... draft.
Posted by W. Hackwhacker at 12:26 PM