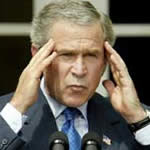 To give you an idea of how far the U.S. image has suffered under this Assministration, some 63% of Kuwaitis worry that the U.S. could become a military threat, with 26% seeing the U.S. as Kuwait's biggest threat. This from the country that we liberated from Saddam Hussein in 1991.

Photo: Dumbya using his 'magination to see them Kuwaiti women lawmakers.
Posted by Hackwhackers at 5:19 PM