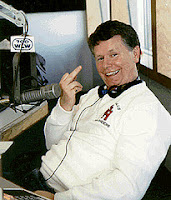 While we're on thuggish "conservatives," we fear this pinhead is closer to the Rethuglican mainstream than some would like to admit. Why do we say that? After these remarks, Walnuts supporter and former Ohio Congressman Rob Portman said, "Bill Cunningham lending his voice to this campaign is extremely important."

Well, he got the "extremely" part right. Giving him minimal credit, Walnuts condemned the remarks after everyone went home.