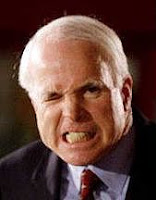 The Daily Kos has a good summary of the "McBush's Rich Wife's Plane" kerfuffle. The gist is that McBush was using his beer- distributor- millionaire- wife's corporate jet in the campaign -- not technically illegal, but somewhat hypocritical based on McBush's earlier statements. Once again, it is the appearance of fudging, of shading the truth, of being less than the straight talker that may cause this to resonate for a few days before the McBush-adoring, short attention span media move on.

Also, following his Pennsylvania primary showing (completely ignored by the media), where Ron Paul (nominally still in the race) and Mike Huckabee (out for some time) together polled over 25% of the Republican primary vote, another bad sign for the presumptive Rethug nominee, this time from Nevada.
Posted by W. Hackwhacker at 8:28 PM

I really like this blog. I get so fed up with politics and all of the garbage some of these clowns come up with. Your pictures are the best and they give me a chuckle. My goodness...what is gonna happen to us?

The media likes to reduce everything to what it thinks is the lowest common denominator. What people need to do is stay focused on the real problems (economy, Iraq, etc.) and discount the media's natural tendency to simplify and sensationalize everything. Regardless of who one supports, it should be based on which candidate best matches one's own views about what direction we should be headed (never an easy decision). Thanks for your comment, as always, Suzette!