Rethugs Have The Mississippi "Blues" 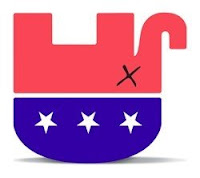 In one of the reddest Congressional districts in one of the reddest states, Mississippi Democrat Travis Childers won a special election over his Rethuglican opponent yesterday, in what has been called very bad news for Rethugs. This follows earlier defeats for Congressional seats in Illinois (Bill Foster winning former Speaker Hastert's seat) and Louisiana (where Dan Cazayoux won in a heavily Rethug district). With 82% of Americans saying that we're on the wrong track, this looks like the beginning of a major shift in Congress come November.
Posted by Hackwhackers at 9:06 AM