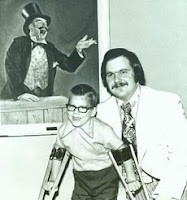 Right-wing radio hack and pill popper Rush Limpballs has carried lots of water for Preznit Dumbya over the years, so it's only fitting that Dumbya repay the Limpballs family with a federal appointment. That would be Limpballs' cousin, Stephen, who was appointed Federal District judge for the Eastern District of Missouri, after Senate confirmation (!).

(photo: Rush Limpballs, sporting his John Wayne Gacy look from yesteryear)
Posted by Hackwhackers at 8:17 AM