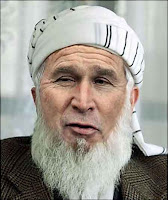 Sen. Obama delivered an important foreign policy speech today in which he pointed to the worsening situation in Afghanistan (where the Taliban/al Qaeda is growing in strength). Speaking of Dumbya's Iraq adventure, Obama said:

"This war distracts us from every threat that we face and so many opportunities we could seize. This war diminishes our security, our standing in the world, our military, our ecomomy, and the resources that we need to confront the challenges of the 21st century."

Joint Chiefs of Staff Chairman Admiral Mike Mullen has recently said that additional combat brigades are needed in Afghanistan to counter a resurgent Taliban and their al Qaeda allies. The needed combat brigades are tied down in Iraq - - and are suffering from fatigue after multiple "stop loss" tours of duty. Chimpy's brilliant strategery in operation.

(photo: Undercover Chimpy: "They caught me when ah asked for some bacon on mah pulao, heh heh. I jes did what Dick told me to do")
Posted by Hackwhackers at 2:25 PM