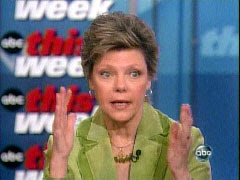 It ususally takes us a day to recover from Sunday's gab fests in which our esteemed Beltway punditocracy expound on what they think are major issues (Edwards' affair, is Obama "arrogant," are Bill and Hillary still mad, McSame's a great guy, etc. etc.). They typically frame these discussions as "what Americans are talking about" when it's really all about what fellow Villagers - - media elite in DC - - spend their time gossiping about. The credit and housing crises and gasoline prices don't touch their lives or huge incomes.

Take for example Cokie "Okie Dokie" Roberts. She's Village royalty, having both a political (father was former Louisiana congressman Hale Boggs) and a media pedigree. In her appearance on ABC's This Week, she said that Sen. Obama shouldn't have picked Hawaii as his vacation spot (despite the fact that his grandmother is there, and he lived there for some time): "too exotic" she thinks. Better that he go to Myrtle Beach, SC, according to her. Actually, Okie Dokie should leave her Village bubble and journey to Kansas, or Georgia, or Connecticut and talk to real people with real problems, and not worry so much about where Obama goes on vacation. Her appearances on Sunday talk shows might improve, but don't bet on it.