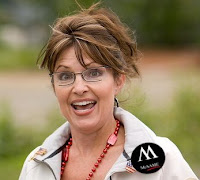 Yesterday, ABC's Charlie Gibson gave Gov. Who? her first real job interview, since McMaverick didn't do an adequate job himself. The verdict? Well, she had no clue about the main foreign policy doctrine that her party's President has operated under since 2002. She also thinks it would be grand to stick a thumb in Russia's eye by having Georgia (and Ukraine) in NATO. Thus, the next time Saakashvili sends troops into South Ossetia, and the Russians react, we can go to war with the Russkies! And then maybe Iran!

But don't take our biased view that she bombed by simply repeating stock, practiced responses to almost every question. A cursory view of wingnut websites (no links) shows that they are in a worried tizzy that Gibson would ask Who? such impertinent foreign policy questions. They know she didn't cut it, but they're blaming the interviewer and the questions. "Let's talk about lipstick on a pig!"
Posted by Hackwhackers at 10:30 AM