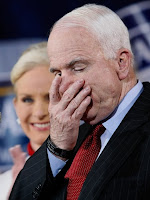 Last week's McClown charade, where he "suspended" his campaign (only to appear on every network and cable outlet) to parachute into Washington to help negotiations the economic rescue plan (about which he knew nothing), only to see the negotiations stall on his arrival (and restart Friday when he decided the game was up). . .well, you get the idea. And where was McClown during the tense negotiations Saturday night? Politico has the answer:

"As his colleagues worked the deal at the Capitol Saturday night, McCain and his wife, Cindy, dined with Sen. Joe Lieberman and his wife, Hadassah, at Cafe Mozu inside Washington's Mandarin Oriental Hotel."

So while his colleagues were chowing on pizza and Five Guys burgers, McClown was away from the battle, with his number one sycophant and whisperer of facts, Joe Lieberliar, dining in a four star hotel. Such leadership!

(photo: "I don't think the oysters on the halfshell were fresh, Cindy. . .mmmfffff. . .bleaaaah")
Posted by Hackwhackers at 11:44 AM