Credit Where It's Due 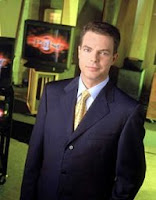 Every so often, we're surprised at a gesture or turn of events that gives us some hope for decency. Yesterday's announcement by Gov. Crist of Florida that he would extend voting hours from 8 to 12 hours per day was one of those times. Also, we saw on Crooks and Liars that Fux News (!) anchor Sheppard Smith pushed back hard on phony plumber Joe Whatshisname when he claimed that a vote for Sen. Obama was a vote for the "death of Israel." Smith's closing statement rebutting the charge is worth watching. Good for him. (We also recall that Smith's in-person coverage of Hurricane Katrina was honest and passionate; he kept demanding that Federal resources be rushed to New Orleans).
Posted by Hackwhackers at 11:13 AM

I saw that Fux clip too. I don't understand why he is at Fux when it appears he wants to be or is a real journalist.