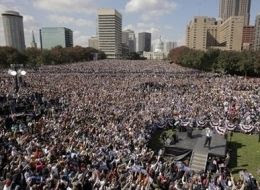 A rally for Sen. Obama drew an estimated 100,000 in St. Louis today. Obama's opening comment on the crowd size? "Wow."

Missouri is a swing state that is a toss up at this point. Obama's message at the rally was that McAngry was clueless about middle class problems and would extend the same tax breaks to the wealthiest Americans that Chimpy has. Now the trick is to keep the heat up on McAngry's dishonest campaign until November 4.
Posted by Hackwhackers at 5:26 PM