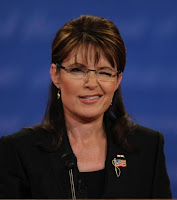 Now that the McSame campaign has gone belly-up, reports are leaking out of their campaign of Gov. You Betcha's odd behavior and expensive taste. This is to be expected, as the McSame loyalists are pointing fingers at Caribou Barbie as part of the reason for their demise. Here are some choice tidbits:

-- You Betcha greeted McSame senior advisors in her hotel suite during the Rethug convention wrapped only in a towel. Hmmmmmm. Maybe You Betcha was mistaking their visit for an episode of "Big Brother" or an audition for a Hustler magazine spread.

-- You Betcha spent a whole lot more than the reported $150,000 on her glad rags; she also ran up the tab for her husband and kids, prompting a McSame aide to describe the shopping spree as "Wasilla hillbillies looting Nieman Marcus from coast to coast. . ."

One only hopes that we've seen the last of this crew, but with the Rethugs as delusional as ever, that's not likely.
Posted by Hackwhackers at 2:17 PM