The Best Of The Inauguration 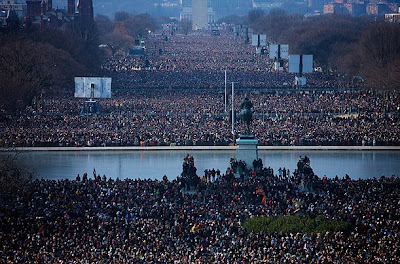 The best crowd. Just under 2 million people. No arrests, no fights.

The best laugh: Rev. Joseph Lowrey with his rhyming, "when black will not be asked to get back, when brown can stick around, when yellow will be mellow, when the red man can get ahead man. . ." Glad he didn't get around to Eskimos, Sri Lankans and Croats.

The best review: Little Sasha Obama giving her father a thumbs up after his speech.

The best inaugural ball: The Commander in Chief's ball, where Obama praised the men and women in uniform, and told them his proudest duty would be as their commander in chief. Then, Obama and Michelle danced with two enlisted attendees.

The best cringeworthy moment: The crowd singing "Hey Hey Hey Good Bye" as Bushie's helicopter flew overhead was naughty and awkward in the happy, mellow aura of the inauguration.

The best moment for wingnut heads to explode: "I, Barack Hussein Obama. . ."
Posted by Hackwhackers at 9:47 AM