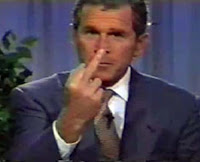 It's taken us almost a full day to recover from the vertigo effect Preznit Chimpy's last press conference had on us. Chimpy, spinning wildly, was doing his best to defend his sorry record on the domestic front (economy, Katrina) and foreign front (Iraq, relations with the international community). He was alternately defiant, petulant, whining, delusional, and pathetic. He wants his greatest achievement to be remembered as defending the U.S. after 9/11, when in fact one of his greatest failures was ignoring intelligence that bin Laden was planning to launch attacks using airliners at least a month before 9/11 -- the infamous "you've covered your ass" briefing given to him in August 2001.

He wants to be known as the great Decider, making the tough decisions. The decisions were tough, yes, but he consisently made the wrong ones, usually after ignoring facts in front of him, or worse, making "the facts" up. The country has paid dearly for his arrogance and stubborn refusal to admit errors and to learn from them.

UPDATE 1: Here's the opinion of a psychiatrist about why Chimpy is the way he is.

"By the time he finished, it was hard to imagine why only 23 percent of Americans are able to see the Bush years for the unqualified success that they are. . .Further complicating his last-minute legacy rehabilitation: nobody seems to be listening. The White House had high expectations for yesterday's final, historic news conference. . .But when the appointed hour of 9:15 a.m. arrived, the last two rows in the seven-row briefing room were empty, and a press aide told White House interns to fill those seats."

Posted by Hackwhackers at 8:57 AM