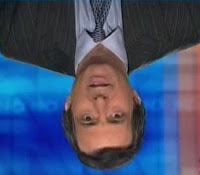 Poor Howie "Get That Job?" Kurtz, WaPo and CNN media "critic." Seems Howie (married to a Rethug political consultant, a fact he never fails to omit) is all a-tizzy that the "librul" media is getting too ga-ga over Obama. In a recent article, snatched from RNC talking points (or perhaps Grover Norquist's - wait, same thing), Howie "Get That Job?" asks:

"At what point does the recognition of Obama's gifts and this juncture in history spill over into partisan adulation?"

(Our reply would be: Where did you learn to write such graceful prose, at an RNC workshop for hack "reporters"?) We're sure Howie will keep his finger on the pulse of the media and report every instance of "partisan" behavior, seeing as how he already has an occasional "Obama Adulation Watch" feature in his rat's ass column. Keep up the good work, Howie! Say hi to your wife!

(Photo: Howie's world turned upside down after the election)
Posted by W. Hackwhacker at 2:28 PM