The Poisoner Clams Up 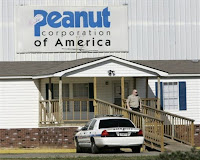 Yesterday, a subcommittee of the House Commerce Committee hauled Stewart "The Poisoner" Parnell in to testify about the salmonella outbreak that's killed 9 people and made some 550 sick. Parnell is the head of the Peanut Corporation of America, the suppliers of the tainted peanut products. The Poisoner, a poster child for "e-coli conservatism", took the fifth amendment and refused to testify, even when one Congressman asked him if he would consume one of his own tainted products.

The Food and Drug Administration says his company knowingly shipped their tainted food out at least 12 times since 2006, to schools, nursing homes, and to large food companies. The Poisoner saw the problem not as a health and safety issue, but as a threat to his bottom line. The positive salmonella tests were "costing us huge $$$" he said in an internal e-mail, and then wrote about his peanut products "let's turn them loose." The greed culture wasn't limited to Wall Street, and it flourished under a government that for eight years cut oversight funding and gutted health and safety regulations as "burdensome" to "bidness."

A long-term jail sentence for The Poisoner wouldn't be sufficient for the people he allowed to die and the hundreds more he allowed to get sick with salmonella poisoning. A forced diet of his products in prison might provide equal justice to the people that suffered as a result of his greed and inhumanity.
Posted by Hackwhackers at 12:25 PM