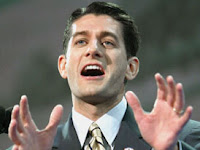 "We're standing on our core principles, and the core principle [sic] that suffered the most in recent years was fiscal conservatism and economic liberty." - Rep. Paul "I Can't Count, But I'm Tryin'" Ryan (Rethug-WI), exhibiting a characteristic lack of empathy (is that "economic liberty" from a job, Paul?) and bad timing (er, those tax cuts for the wealthy in Dumbya's first term was the time to talk fiscal conservatism, not now when the economy is in meltdown). Just say "no" to economic stimulus! Yeah, that's the ticket! Asshole.

UPDATE: As if to confirm "I Can't Count's" removal from reality, check out the latest Gallup Poll on Americans' view of the Rethugs vs. Obama and the Democrats.

(Photo: Rep. Ryan, finding his tiny little conservative voice a bit too late)
Posted by W. Hackwhacker at 7:51 AM