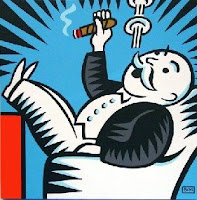 It didn't take long for the Rethuglican elite to come to the defense of the corporate pirates that wrecked AIG and who are pocketing millions in bonuses. Given the choice of siding with the taxpayers or the mega-millionaires, these wingers went with their buds. Take Rethuglican Dear Leader Pills Limpballs ("he who must be obeyed"), who said that "peasants with their pitchforks" were surrounding AIG headquarters. Peasants! Pills, you need to be more subtle with your class warfare than that. Granted what you spend per year in Oxycontin would support three middle class families, but you have to be more "populist" with your Dittohead audience who might be some of those "peasants." Then there's CNBC's Rick "the Dick" Santelli and Rethuglican Senator John "Smile" Kyl, who think the millions given in undeserved bonuses are not worthy of attention and that the issue is being demagogued. Finally, we have former White House Press Suckertary Dana "If My Lips Are Moving I'm Lying" Perino, who also wants to call off the dogs, and let her "middle class" buddies in the Hamptons continue the lifestyle to which they've become accustomed.

Maybe next we can hear from Joe (not his name) the Plumber (not really a plumber), Rethuglican philosopher.
Posted by Hackwhackers at 10:09 AM