Milbank: Don't Hate on Me 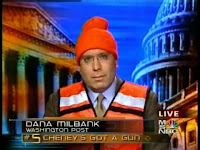 WaPo snark columnist Dana Milbank wants to know Why the hate from the left? He says he understands right-wing nuts' anger (they lost the last few elections -- badly), but us left-wing nuts? Offering a few readers' opinions from left and right, he still is mystified by the anger from the left at his writing.

Let me give my own personal reason for disliking Milbank's work: he's a quibbler, a jaded jackass whose valuable column space would be better taken up by a serious observer (like a Glenn Greenwald or Naomi Klein). When the focus of the media is all too often on the superficial and the anomalous, playing to popular stereotypes, Milbank is the snarky epitome of the "journalist" detached from what's going on in the real world. And what's going on in the real world deserves serious attention, not flippant columns about Obama behaving like a "LendingTree.com pitchman."

Milbank doesn't like to choose sides. He's an equal opportunity snarker. Much like the eunuchs who manage and contribute to the WaPo's editorial page (calling Fred Hiatt, calling David Broder), he sees virtue in a "middle ground" that exists only in the abstract. That he's been subjected to criticism from right and left seems to be a badge of journalistic honor for Milbank. I see it differently. In times when serious people are trying to do serious work to repair our economy, our standing in the world, and our planet itself, there are sides to be chosen. Are you for or against? Being in your bubble, snarking about people trying to turn things around may make you a hero of the Washington salon class, but it also contributes mightily to the perception that the "old media" is out of touch with the real concerns of real people-- and that Milbank, like much of the Washington political/ media class is still "wired Republican."

And as far as the "unhinged left?" Did you see some of those teabaggers' signs this week? That stuff was "off da hook" (to use Tin Man Steele's hippity hop lingua franca).
Posted by W. Hackwhacker at 9:56 AM