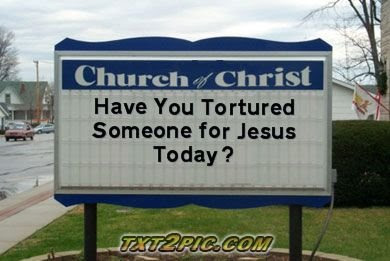 One of the more interesting phenomena of American life is the fact that people who identify as fundamentalist, conservative Christians are the most likely to support military adventures abroad and, it now appears, torture. In a survey conducted by the Pew organization, 54 percent of the Bible-thumpers said that torture was "often" or "sometimes" justified in the interrogation of suspected terrorists. Ah yes, such good Christians.

Actually, listening to the sermons of Southern evangelical or pentecostal "ministers" would break any terrorist quicker than waterboarding.
Posted by Hackwhackers at 1:04 PM