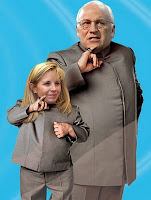 WaPo media critic Tom Shales has a good take on the hijacking of last Sunday's "This Week with George Stephanopoulos" by The Dick's daughter, Lizard "Liz" Cheney. Lizard is in full screech mode on the program, refusing to shut up so that others can introduce inconvenient facts into the discussion. Shales notes that Lizard -- a "rising purple pundit of the right" -- continuously talked over other guests who were disagreeing with her dishonest statements concerning torture and terrorists. Shales writes:

"Cheney has a way onf continuing to talk, charging forward in single-minded determination, when someone else has the floor, even if that 'someone' might be moderator Stepahanopoulos. . .It may not matter to Cheney that her own argument can't be understood as she continues on her course of rudeness as rhetoric. . .this is 'discussion' as obfuscation, the use of language not to communicate but to obliterate."

Lizard's technique is not new; it's the standard technique of Rethugs and righties when "debating" progressives or simply answering questions. They've been to their "media school" and taught to talk and talk until the time is used up and their questioner can't follow up or pose more questions, or their progressive counterpart has no time to respond. It's also symbolic of their anti-democratic, authoritarian mindset which they used in the past eight years to stifle discussion, smear Dems and shout down the opposition. Letting them near the levers of power again would be very dangerous to our liberty.
Posted by Hackwhackers at 12:51 PM