"No Public Option, No Support" 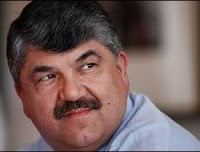 That's what the rallying cry for all progressives should be who are concerned about Democrats negotiating (with themselves) the public option away. As it happens, it was voiced by Rich Trumka, the soon-to-be head of the AFL-CIO. Unfortunately, the Democratic wing of the Democratic Party doesn't seem to be in charge at the White House or in large swaths of Congress. The latest bullshit from an "unidentified Administration source" (Rahmbo?) is that the White House might want to screw progressives, just to show "independents" that Obama can buck his own party "to get things done." What makes us think of Rahmbo you ask? Isn't this the same kind of triangulation the Clintonistas thought they were so clever about -- abandoning traditional Democratic principles in the process? How'd that work out for ya?

Now if that isn't the most asinine, self-defeating "strategery" we've ever heard, not to mention a gratuitous slap at the folks who brung you to the dance, we don't know what is. One can only hope these are trial balloons, in this case filled with someone's fiddle farts, because if this turns out to be the "thinking" going on, the predictions of some wingnuts that the Obama Administration will most closely resemble Carter's might not be so far off.