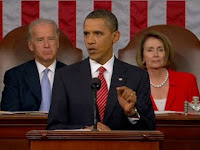 The immediate upshot of President Obama's speech on health insurance reform was to reverse the trend of Americans supporting his plan: a post-speech poll by CNN indicates that 67% now favor the plan the President outlined, a gain of 14% in one day. Clearly, he hit a home run with his calm, but passionate, case for acting on reform legislation now. And it drove the Rethugs crazy. Paul Begala has his take on the greatness of the hard-hitting speech: we're going to call out the liars and push back hard on the special interests who profit from the system's dysfunction. The image of the angry Rethuglicans sitting on their hands, or contemptuously fiddling with their Blackberrys, or voicing their anger was in stark contrast to Obama's seriousness and calm. Said Tom Shales in the WaPo:

"The contrast worked to Obama's advantage; he looked and sounded calm and rational, though certainly assertive, while moblike voices railed defiantly against him."

In one now notorious example of Rethuglican thuggery, South Carolina Rep. Joe "Shit For Brains" Wilson shouted "you lie" as the President called out the Rethugs and their allies for spreading lies about the Dems health care reform legislation. Even his own Rethug colleagues were embarrassed by "SFB"'s juvenile taunt. "SFB" later apologized, but it appears that his tantrum has resulted in a significant fundraising boost for his opponent, former Marine and Iraq War vet Rob Miller. Couldn't have happened to a more worthy wingnut.

(photo: Obama telling the Rethugs something they don't want to hear: the truth)
Posted by Hackwhackers at 10:30 AM