This Franks Is A True Weenie 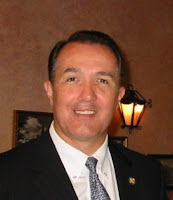 Far right-wing nutcase Rep. Trent "Beans &" Franks (Rethug-AZ) appeared at the hatefest called "How to Take Back America" conference, a collection of right-wing malcontents and racist loons who apparently want to "take back" (with guns if necessary) "their country" ( which would exclude blacks and other minorities). Saying that the President was "an enemy of humanity," Beans & Franks went on to demand that the President show his birth certificate, and to declare that Obama's position on abortion (which is moderate, actually) was "insane."

OK, we will acknowledge that Beans & Franks is an expert on insanity, but going the "birther" route? Looking for a date with Orly Taitz, are we? Not with that mug, Beans.

(photo: Beans & Franks learned as a child that kissing a hot stove wasn't the ticket to Hollywood)
Posted by Hackwhackers at 1:39 PM