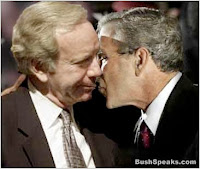 Following the cue of the wingnut media, Sen. Joe Lieberliar (Party of Joe - CT) will be holding Homeland Security hearings on "czars" in the Obama Administration. This has been one of the phony "issues" that the right wing has thrown against the wall, hoping to gain some traction. Most of the "czars" are holding positions created by Dumbya's Assministration -- but don't tell the wingers.

Lieberliar, of course, was extended the olive branch by Obama, who declined to insist that the Senate strip the sanctimonious weasel of his committee chairmanship after he supported Sen. McSame in the 2008 Presidential race. Note to the President: Learned your lesson?
Posted by Hackwhackers at 3:58 PM