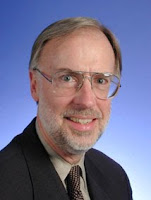 The Kaplan Daily's Dan "No" Balz (heir apparent to David "The Dean" Broder - they even share the same initials) has a fluff piece for the ages today, "How governors could guide a Grand New Party." Why Dan is just giddy with the idea of a resurgence of the Rethugs behind the middle- aged- white- man leadership of Mississippi's Haley Barbour or Indiana's Mitch Daniels! He'll even take Tim Pawlenty or Mittens Romney! Any white guy will do! A Grand New Party, yessiree! Let's bring back the party that led us into Iraq and the worst economic collapse since the Great Depression! Obama's had his one lousy year!

But his treatment of Texas' Rick "Hair" Perry is most revealing:

"Over the past year, he has emerged as another leader in the anti-Washington movement, with talk of secession that has made him the darling of many conservatives."

That's it. No analysis that a governor talking about secession in 2009 would be immediately disqualified from consideration for national office; no comment that appealing to the tea-bagger fringe of the Rethug party is further polarizing politics and pushing the Rethugs farther away from the mainstream. No, none of that from No Balz. That's because he and so many of the Beltway Villagers have become completely desensitized to the radicalization that's been going on in the Rethug party for the past 30 years or so. Had a progressive talked about secession - you know damn well No Balz and the other Villagers would pronounce that person a joke, politically dead. Instead we have this passing by without a whisker on his face being disturbed.

(Photo: His giddy Balz have been desensitized)
Posted by W. Hackwhacker at 10:33 AM