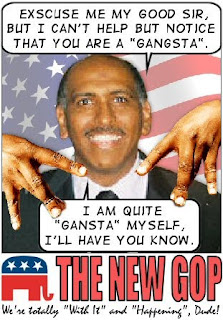 You can't accuse of Rethug National Committee Chairclown Michael "Shizzle" Steele of being clear-headed. The latest brilliant move by Shizzle was criticizing Dems for reaching out to minority groups, while he's attempting the same thing. Shizzle has become an object of ridicule across the political spectrum for his obvious insincerity and hypocrisy, and the countless gaffes which seem to pour from him like a broken faucet. What set Shizzle off was DNC Chairman Tim Kaine's statement that Dems would be reaching out to black and Latino Americans (among others) in 2010.

Of course, it was Shizzle who told an audience of black college students just last month that the Rethugs have been practicing a "Southern Strategy" appealing to Southern white voters for the past 40 years, so black America really didn't have a reason to vote Rethug: one of Shizzle's rare clear-headed statements.
Posted by Hackwhackers at 1:30 PM