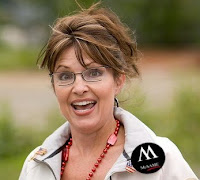 Tea bagger heroine Winky You Betcha may have jumped the shark with her loyal sheeple. She's endorsed corporate dud and former McNasty campaign bungler "Snarly" Carly Fiorina for Senate in California. Earlier in her career, Snarly Carly nearly ran Hewlett Packard into the ground, but managed to get a huge golden parachute for herself. And Snarly Carly isn't a favorite of the tea baggers. Winky's official forum for policy pronouncements -- her Facebook page -- is getting angry messages from the baggers who wanted their snowbilly idol to endorse an even more radical right-wing candidate.

Let the divisions between right wing Rethugs and even more radical tea baggers continue and deepen! And let the bungling Winky be the catalyst!

UPDATE: Winky might want to check on her 19 year-old daughter Bristol's whereabouts from time to time. She was spotted at a NY city club -- you need to be 21 -- until about 1 a.m. the other night. You betcha!
Posted by Hackwhackers at 11:03 AM