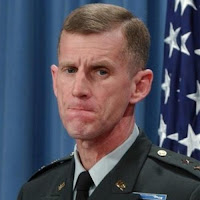 It would appear that the commander of U.S. forces in Afghanistan, Gen. Stanley "Loose Cannon" McChrystal, will be (no pun) fired after numerous derogatory comments that he made about the President, Vice President, Secretary Gates, Admiral Mullen, and numerous other senior Administration and military figures appeared in Rolling Stone magazine. Wow, nothing like burning bridges on the way out. Obama is reported to be furious after seeing Loose Cannon's remarks, and wants a face-to-face with him tomorrow at the White House. Loose Cannon has already "apologized" to everyone for the comments, but the damage is done (he must have the same PR guy as Joe "Not A Smart 'Un" Barton).

This wouldn't be the first time for the General to find himself accused of insubordination. In a speech in London last fall, Loose Cannon preempted the Administration's decision on troop levels by publicly identifying a troop level that he wanted. Now, Loose Cannon may have fired his last, ill-advised salvo.

(photo: Now they tell me to button my lip)
Posted by Hackwhackers at 9:07 AM