Oligarchs of the World Unite! 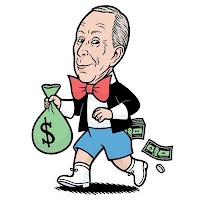 Not surprisingly, New York Mayor and uber-billionaire Michael Bloomberg has come to the defense of a fellow moneybags. But it's the moneybags he's defending that's mindboggling: BP CEO Tony Hayward. According to the New York Times,

"Mayor Michael R. Bloomberg defended the executive, Tony Hayward, on Friday, saying the public should not rush to fault the company’s leaders for the oil spill in the Gulf of Mexico. . . . On Friday, Mr. Bloomberg said BP should be left alone until the recovery operation is complete. 'If you want him to fix it and they’re the only ones with the expertise, I think I might wait to assign blame till we get it fixed,' the mayor said."

Leaving aside the fact that BP has already taken "responsibility" for the blowout, the Mayor might want to take note of the fact that BP's environmental and safety record has been blemished by numerous violations over the years, so malfeasance on their part wouldn't be an unreasonable assumption. Or he could just read this.
Posted by Hackwhackers at 6:08 PM