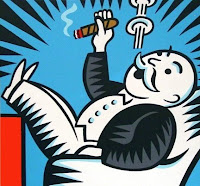 One of the Rethuglican Party's objectives for the remainder of the year is to extend the Bush tax cuts for the wealthiest Americans beyond their expiration date of 2010. In his column today in the New York Times, Nobel Prize winner Dr. Paul Krugman explains that this would be equivalent to cutting $3 million checks for each of the 120,000 wealthiest Americans. Citing the Tax Policy Center, Krugman shares some other factoids:

-making all of the Bush tax cuts permanent, as opposed to following the Obama proposal, would cost the federal government $680 billion in revenue over the next 10 years.
-the majority of the tax cuts would go to the richest one-tenth of 1 percent.
-only a tiny fraction of small-business owners would receive any tax break at all.

Along with their attempted obstruction of the financial reform bill, the Rethuglicans are shamelessly demonstrating who they care most about: not the broad middle class, but the most affluent Americans, who have not been impacted by the economic downturn but who contribute generously to the Rethuglican cause.
Posted by Hackwhackers at 11:48 AM