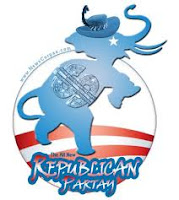 The Kaplan Daily reported the other day that the Rethuglican National Committee's chairclown Michael "The Shizzle" Steele is "burning through money" for the Rethug's 2012 convention in Tampa. The report notes that The Shizzle has spent 18 times the amount spent in the comparable period before the 2008 convention, a pace which has "alarmed" some Rethug leaders. Hey, give The Shizzle a break: strippers cost more these days!

The Shizzle will have a tough fight on his hands for the RNC chairclown position in January. His financial recklessness, frequent gaffes and general buffoonery have made enemies among Rethug elected officials and many RNC committee members. For The Shizzle, however, there's always a spot on the Fux Channel.

BONUS BONER: To help Rethugs combat the libruls' War on Christmas, be sure you shop at the RNC store for your Christmas...huh, whazzat? Happy Holidays gifts?!? Why do they hate Christmas?
Posted by Hackwhackers at 3:24 PM