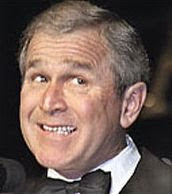 This is shocking, SHOCKING! We would never have guessed it. It appears that Dumbya plagiarized his White House aides' books in writing his memoir, "Decision Points," published by Crown:

"Crown also got a mash-up of worn-out anecdotes from previously published memoirs written by his subordinates, from which Bush lifts quotes word for word, passing them off as his own recollections. He took equal license in lifting from nonfiction books about his presidency or newspaper or magazine articles from the time. Far from shedding light on how the president approached the crucial 'decision points' of his presidency, the clip jobs illuminate something shallower and less surprising about Bush's character: He's too lazy to write his own memoir."

Now we have a better idea of how he got through college.
Posted by Hackwhackers at 4:03 PM