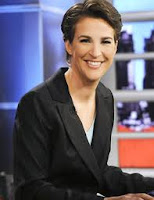 MSNBC's Rachel Maddow is an all-too-rare commodity these days. Fearless, progressive, and articulate, she cuts to the core of the hypocrisy in today's Rethug-wired major media world. Her deconstruction of the Rethug argument, pushed by the media, that they're the fiscally responsible party is brilliant. Crooks and Liars has the video here (the "game show" opening bit is grating but instructive).

We can expect the talking heads on TV and the Ted Koppels of the media to tut-tut Rachel's point. They no longer see their roles as reporters of fact, but as scorekeepers and stenographers. They've been intimidated over the years by continuous Rethug accusations of "bias" when their reports run counter to Rethug myths.
Posted by Hackwhackers at 10:05 AM