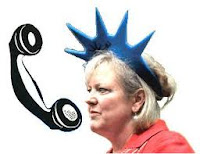 "It was probably a mistake on my part." Teahadist kook Ginni "The Ninny" Thomas, wife of accused sexual harasser and far-right Justice Clarence "Long Dong" Thomas, in an interview, referring to the strange message left on law professor Anita Hill's phone a few weeks ago.

Rather than asking Prof. Hill for an apology, the Ninny should be asking her husband why he declined to take a lie detector test to clear himself, when Hill passed her lie detector test. And why a former girlfriend of Long Dong's said his behavior with Hill fit a familiar pattern. We'll be waiting for the results of her inquiries.

(photo: Lady Jibberty herself)
Posted by Hackwhackers at 3:26 PM