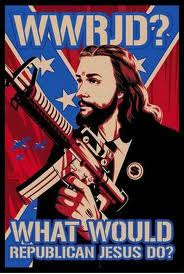 Rethuglican Senators Jon Kyl and Jim "Demented" DeMint have accused Senate Majority Leader Harry Reid of "disrespecting" Christmas and sacrilege, respectively, for threatening to keep the Senate in session to vote on bills that the Rethugs have blocked. Reid fired back, saying:

"As a Christian, no one has to remind me of the importance of Christmas for all of the Christian faith, for all their families, all across America. I don't need to hear the sanctimonious lectures of Sen. Kyl and [Sen. Jim] DeMint to remind me of what Christmas means."

Clearly, these two simply want the Senate to adjourn without voting on the START treaty, Don't Ask Don't Tell, and other bills that they have stalled through their relentless obstruction. They want a more Rethug-friendly Congress to act come January, and they're not ashamed to stall and demagogue using religion.

Reid needs to stay with an aggressive legislative agenda, and force these malevolent hypocrites to stick around and do their job.
Posted by Hackwhackers at 12:57 PM

I believe I heard that cancellation of DADT and passage of START, this year, were two of the things the president got as part of the compromise over the tax issue. They need to stay there and keep their word. If they can't do that, they need to go home and stay home. P.E.C.