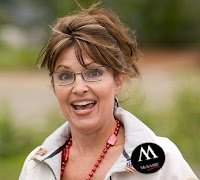 There's an increasing tendency on the far-right to twist or outright fabricate U.S. history to suit their political message. Case in point: half-term Alaska Governor Sarah "Mama Fizzley" Palin, who thinks that the Soviets won the "space race," and that the cost of the space race caused their country to collapse roughly 30 years later. Fizzley, who is trying to compete with loony Michele "I See Commies" Bachmann for the tin foil hat demographic, was responding to President Obama's "Sputnik moment" reference in his State of the Union message.

While Fizzley may not realize that the U.S. "won" the space race by being the first on the moon -- thanks to a massive Government-led and funded effort -- she's bucking Rethuglican orthodoxy by saying that the Soviets' expenditures on the space race caused their economy to collapse. Here all the time we thought St. Ronnie of Hollywood brought the Evil Empire to its knees by winning the arms race, which the Russkies couldn't match.

As Keith Olbermann often said when referring to the Wasilla Wingnut, "That woman is an idiot."
Posted by Hackwhackers at 1:55 PM