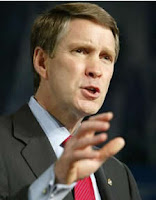 That would be former Senate Majority Leader Bill Frist of Tennessee, who tells all who will listen on the right (crickets chirping) to give up on the health care reform law repeal and instead build on it. Frist, who isn't running for any office, has the freedom to behave like a grown-up, unlike his elected Rethug brethren.
Posted by W. Hackwhacker at 5:46 PM