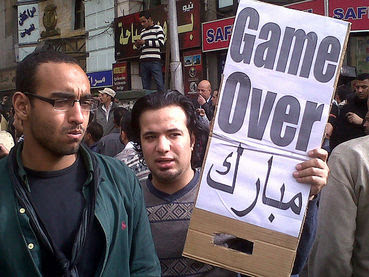 Hundreds of thousands of Egyptians are gathering peacefully in Cairo's Tahrir Square to demand that Hosni Mubarak resign immediately. Calling it the "day of departure," the demonstrators have been joined by Egyptian government figures, among them Arab League secretary general Amr Moussa. Largely absent are counter-demonstrators, who have clashed violently in past days with the anti-government crowds.

Mubarak and his inner circle are reportedly furious at the U.S. and its western allies for siding so quickly with the demonstrators, and insisting on his immediate resignation. The U.S. is walking a tightrope in signaling to the pro-democracy forces that we support their aspirations, while not appearing to play kingmaker for the Egyptians. These next few days and weeks are going to be historic for the Middle East and the world.
Posted by Hackwhackers at 10:31 AM