Public To Rethugs: Hands Off The Unions 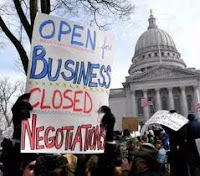 A new CBS News/New York Times poll shows that the public supports public sector employees in their fight to retain their benefits and collective bargaining rights. By a margin of 56 to 37, the public indicated that the pay and benefits of public employees should not be cut to reduce state deficits, and by an even larger 60 to 33 percent indicated that public sector employees should have the right to collective bargaining. Our posting of February 24 cited a Gallup poll showing similar results.

So much for the claims of Rethug Governors that they have a "mandate" to undermine public employee unions in order to deal with their states' budget problems. Americans sense that this is about fairness and preserving what's left of the middle class, and the Rethugs are on the wrong side.
Posted by Hackwhackers at 7:34 PM