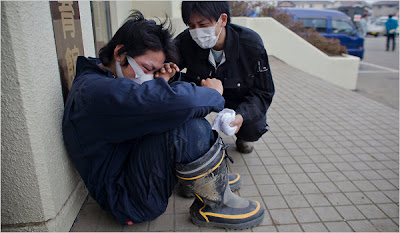 As we said earlier, it's hard to write about the shallow foolishness of our politics and celebrities when an immense human tragedy continues to unfold in Japan. Again, for anyone out there wanting to do something (and join Hackwhackers in contributing), here's a useful contact for vetted organizations assisting the victims of the earthquake and tsunami. If you think that because Japan is a modern industrial power they can handle this alone, think of this disaster as perhaps ten times worse for Japan than what the U.S. suffered after Katrina. And that's not accounting for the potential nuclear catastrophe which we hope and pray will not happen.

Every day, as more rescuers arrive in the affected areas, names of obliterated towns and cities roll by: Otsuchi, Hishonomaki, Watari, Minamisanriku. Miles and miles of total devastation, rubble and ruin. But the faces of the survivors are the most gripping and heartbreaking. In the picture above, a father receives news that his young wife and two children, aged 2 and 6 months, have perished. This moment captured is being repeated hundreds, thousands of times as recovery efforts continue. How can anyone not be deeply moved and heartbroken?

Labels: earthquake and tsunami in Japan. relief efforts in Japan