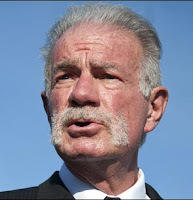 Violence is spreading in Afghanistan as a result of the burning of the Quran by lunatic "Pastor" Terry Jones of the Dove World Outreach Center in Gainesville, Florida, last month. At least 20 people have died, including 7 U.N. employees in Mazur-e Sharif, and scores have been injured. President Obama, Gen. David Petraeus and NATO have issued statements condemning the burning.

Meanwhile, Jones has purportedly been told by the FBI that there's a $2.4 million bounty on his head in Pakistan. We're shocked it's not higher. Here's what Jones' 29-year-old son Luke was quoted as saying after the burning: