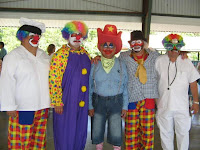 We don't think many people bothered to tune in to the Fux Channel last night to watch a debate among five Rethug losers who have combined poll numbers in the single digits.

Perhaps the best known among them -- Tim "No Good 'N'" Pawlenty -- didn't distinguish himself, and declined to take shots at potential rivals Willard "Mittens" Romney and Mike Hucksterbee, who were absent from the debate. Daily Kos' Jed Lewison has an account of the sad affair.

According to a focus group convened by the Fuxers, Herman "Raise" Cain, former head of Godfathers Pizza and extreme nutbag, was the winner. As an African-American, Raise Cain is the 2.0 version of equally nutty Alan "Give Me The" Keyes, and represents the 0.2 percent of African-Americans who would actually consider voting for a right wing bro.

(photo: The Rethug debaters dressed to blend in with their audience)
Posted by Hackwhackers at 1:53 PM