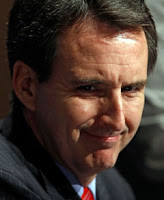 Among the Rethuglican candidates for President, former Minnesota Gov. Tim "Bad and" Pawlenty always seems to get a pass on his record, compared with Willard "Mittens" Romney and Poot Gingrich. That may be changing, as Pawlenty is getting hammered from an unexpected source: former Minnestoa Rethuglican Gov. Arne Carlson. Carlson has been quoted as saying,

"I don't think any Governor has left behind a worse financial mess than he has."

Carlson blames Pawlenty for undoing important State fiscal reforms, and leaving Minnesota with a $6 billion deficit, one of the worst in the nation. Ironically, the fiscal year before he left office, he was only able to balance the State's budget by accepting Federal stimulus money, which he then proceeded to mismanage. So when "Bad and" Pawlenty talks about Federal deficits, remember that he has great experience in creating them at the State level.
Posted by Hackwhackers at 9:36 AM